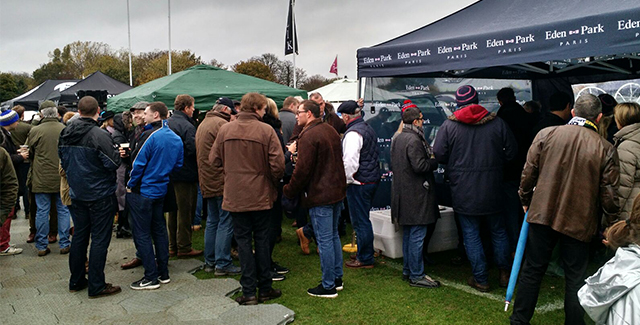 Eden Park and Double H Agency loves treating their customers and recently spoilt six lucky people to an event the French label owes its legacy to – a VIP Rugby match experience. Two of the winners entered the competition at Eden Park’s concession in House Of Fraser’s Richmond branch, whilst the other lucky customer won their ticket at Hall Street in Long Melford and Hadleigh.

Eden Park Rugby day was on the 12th match between England and South Africa – a friendly test match – took place in Twickenham Stadium on a rainy Saturday, but the rain did not ruin the fantastic atmosphere!
Eden Park rugby day hosted a VIP tent where the winners and their plus ones’ were treated to champagne and food before and after the match, as well as getting a closer insight into the label’s history and quality. Eden Park branding was spotted throughout the stadium, which hosted over 80000 guests including Prince Harry! And no matter how friendly this game was meant to be, England – for whom Eden Park is the official sponsor – beat South Africa by a mile.

For further info about Eden Park – and if you’re interested in hosting any future Eden Park competitions – feel free to contact Marc Querol at marc@doublehagency.com